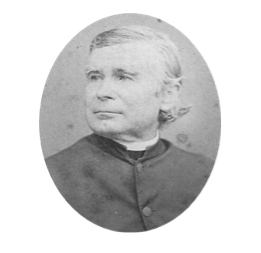 Fr John Baptist Sabon, was born on June 27,1819, at Rochegude, Drôme, France. He was ordained as a diocesan priest in the diocese of Valence in1844. Subsequently he joined the Oblate Congregation and made his final profession in 1848. His first mission was in Algiers, as one of the priests who were sent to open a new mission there. This venture was unsuccessful, and Sabon volunteered to go to Natal with Bishop Allard and his small team to begin the evangelization of Natal and interior in March 1852. They arrived at Port Natal (Durban) on March 15, 1852.

– The Catholics in Durban gave Sabon their affection and care. Eventually he opened and blessed the first Catholic chapel in Durban on July 24, 1853.

– When the indentured Indians arrived in Natal, Sabon immediately visited them and attended to their needs. Within a short time he learned to speak and write Tamil, and later opened the first Indian mission. 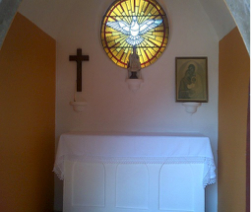 – A visitor to Durban wrote, “The nicest church building in Durban is the Catholic chapel, which I discovered by accident. Attracted on a warm day by some lovely roses blooming in a trim and luxuriant garden, I looked longingly over the fence, when forth came a simple shy old père – Father S. – reputed to be the most self-denying man in the place. His manner is a charming mixture of self-depreciation and courtesy. His garden shall see me again….” (Quoted from Joy Brain’s ‘Catholic Beginnings in Natal and Beyond.’)

– As the Catholics in Durban increased so the need arose for a new and large church.   “The new church, St Joseph’s, was ready for use in November 1881 and Fr Sabon said the last Mass in the old church. The next day, November 13, Bishop Jolivet officially opened St Joseph’s in the presence of a large crowd including the local dignitaries.” (Ditto)

– Eventually he died on the 13 January 1885, at the age of 66, and his funeral was attended by a large number of Catholics, local dignitaries and “hundreds of other citizens of Durban from all walks of life and including Zulu and Indian parishioners from the surrounding missions.”

– In November 1, 1886 Bishop Jolivet blessed the newly constructed chapel of the HolySepulchre. This little “Holy Sepulchre” and “chapel” was built in memory of Fr Sabon.